British Diageo is a major player in alcoholic beverages all over the world. In fact they are the largest producer of spirits in the world. In the Korean whisky market they are most famous for the brand Windsor Whisky. 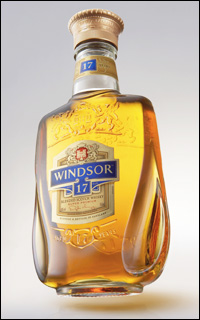 Diageo was formed as a merger between the two UK companies Guinness and Grand Metropolitan in 1997. This merger created a spirits and beer giant with brands that find their way into drinkers’ cups all over the world. The company takes it’s name from the latin words for “day” and “earth” meaning that they products can be had around the world every day. Or as they put it in their slogan: “Celebrating life, Every day, Everywhere”.

As far as scotch whisky goes Diageo is a true giant. They own some well known brands of blended whisky as well as a staggering amount of single malt brands.

Meanwhile in Korea – Windsor on the rocks

In Korea Diageo’s reputation has been built largely on the success of their Windsor whisky, a blended scotch. The brand has been around since 1996 and is made out of Scotland’s Royal Lochnagar distillery mainly for the Korean market. Diageo Korea has been looking too launch the brand globally by introducing it several other Asian countries. Today Windsor whisky spearheaded by the Windsor 12 is the largest whisky brand on the Korean market.

Asides from Windsor several of Diageo’s large portfolio of single malt whiskys are imported into the country. Their big global brand Johnnie Walker also enjoys healthy sales. Due to  In 2013 Diageo announced the opening of their Johnnie Walker House of Whisky in Seoul.

The trend of lower alcohol whisky based drinks that have been gaining more popularity in the country has not passed Diageo by.  In 2016 they launched their “whisky based spirit”  W Signature. It promises to be unique among the low alcohol whisky drinks so popular in Korea by being blended purely from premium scotch aged 17 years. Time will tell who wins the low alcohol wars and who falls to the wayside.